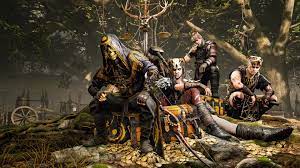 Comedy crime thrillers are perhaps the most difficult genre. It’s easy to keep tonal balance in a 21-minute episode. But it is difficult to balance the show’s nuanced peaks, valleys and emotions. The helm is a writer and director of Stephen Merchant’s calibre, who has demonstrated a deft ability blend humor and tragedy seamlessly in projects such as Hello Ladies and The Office. The latest BBC project, The Outlaws by the Bristolian, is in good hands.

The show, which Merchant considers a deeply personal work, is a result of his Bristolian roots which give The Outlaws their unique west-country flavor. It also subverts expectations. Merchant has made a recent attempt to direct a film about a family wrestling champions in WWE Fighting with My Family. Although Merchant admitted that he didn’t know much about the subject, it is still a bizarre proposition to see him now directing a murky crime thriller starring Christopher Flippin’ Walken, as Frank, and a semi-retired groifter.

It’s no surprise that The Outlaws is a strange recipe in which none of the ingredients seems to be a good match. The idea of seven strangers being forced to do Community Service and finding a bag of cash may sound absurd, but The Outlaws blends Merchant’s sharp dialogue with a more serious, gritty urban drama about drugs, crime, gangs, and politics. The show is accompanied by the distinctive musical tones of a spaghetti western, which contrasts well with the strong, west-country vocals of its protagonists.

This odd marriage allows The Outlaws’ greatest strengths to shine through, while also creating some of its most obvious limitations. It is difficult to overcome the problems inherent in this genre. A dark-hearted thriller-comedy disguised as a “suburban, low-rent type of western” will always have problems switching between styles.

While sharp exchanges of dialogue can elicit laughter, the drama is effective, and grows with its characters. Even the serious gangland elements are convincing in their own right, but there will always be a jarring shift. It can be difficult to connect with urban dramas like a failed cash grab and keep the image of a tabard-wearing Merchant laughing about his kipper-like penis. The enjoyment of The Outlaws depends on your acceptance that the show’s focus will change constantly. In turn, this will affect your expectations.

Surprise, also, for a show that is billed primarily as comedy, the length of The Outlaws episodes. Each episode of the comic thriller from Bristol is one hour long. It was spread over six episodes. This may seem a bit too much for some viewers, but it gives the story room to grow, expand, and fluctuate as needed while also allowing its writers to explore each cast member’s inner-lifes.

Ensemble can make or break their characters and Merchant’s track record makes it easy to see why The Outlaws are so good at this. Many of the central gang members feel like caricatures at first, and are now actively promoting their views and motivations with the subtlety of neon firework. Clare Perkins’ Myrna could as well be carrying a sign that states “I am a civil right activist”, while Eleanor Tomlinson’s Lady Gabby suffers from the same lack of dimension. Jessica Gunning’s Diana, however, can sometimes tip over from a deluded bumbler into a real irritant. Some of her lines, in particular, seem to have been taken from The Office’s cutting room floor.

The characters’ inner complexities are revealed only as the story unfolds. Some viewers may not be able to see beyond these initial two-dimensional chrysalises. Despite this, Rhianne Barreto’s talented but confused kleptomaniac Rani and Darren Boyd’s struggling businessman John, as well as Merchant, are very much in the same vein as Greg, a hapless attorney self-described an ‘albino E.T. All of the characters are brilliant right from the beginning.

Merchant excels when it comes to focusing on character. Merchant is able to focus on people who navigate their own interpersonal problems and dilemmas. The Outlaws flourishes when the story shifts from its ‘thriller spine. To investigate the forces and pressures that exert themselves on the confused protagonists, whether it be Frank’s relationship with his family or Lady Gabby’s dysfunctional relationship with her patriarch. Charles Babalola’s antagonistic Malaki is respected for his own motivations and pressures. Malaki was motivated by the desire to care for a large family with an ailing father.

The Outlaws is a show that rewards time and attention more than it demands. You might struggle to get into the first episode, but you will be rewarded for your perseverance as the narrative threads weave together and the characters evolve. The Outlaws manages to balance a few inconsistencies with the feeling that you are watching two shows all at once. The soundtrack is great and The Outlaws is shot with the kind of style and panache that belies suburban comedy. It is, however, not typical suburban comedy. It’s a hilarious, heartfelt and sometimes truly thrilling piece of comedy-drama. It’s definitely worth looking for.