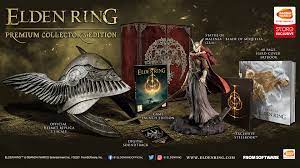 The next big game is Elden ring. FromSoftware published the action role-playing game Elden Ring. What has attracted people’s attention to Elden Ring is the fact that it was a collaboration effort between Hidetaka Mizaki, game director, and George R. R. Martin.

The game takes place within the Lands Between. This fantasy world is created after the destruction and dispersal of the Elden Ring. It sounds very ordinary, at first glance, but it is actually two creative minds working together. We’ll soon discover how deep this fantasy world really is.

We will go over all editions of Elden Ring you can buy.

Elden Ring will be released on February 22nd 2022.

The game will be released for PC, PlayStation 4/5, Xbox One and Xbox Series X/S.

Pre-order Elden Ring at major retailers. The Standard Edition Eldenring does not include any bonuses or extras.

The digital versions Elden Ring will be available on both the current-gen and last-gen consoles of the PlayStation and Xbox.

Pre-Order Elden Ring Collector’s edition and Get a Bonus