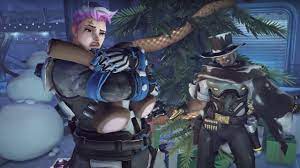 Winter Wonderland 2021 has been postponed by Overwatch. AndyB, the game’s Community Manager, confirmed this today on the Overwatch forums. This event is one of the most popular in the game, featuring festive-themed cosmetics that include Santa skins, highlight intros with ice and snow-covered winter maps like Hanamura and King’s Row. It is easy to see why this event is a community favorite.

The community manager stated that the delay was due to unforeseeable circumstances. They said they are only pushing back the event by a few more days. They are likely referring to Thursday 16th December or Tuesday 21st. It shouldn’t take too long. AndyB teased that the legendary skins for this year are especially outstanding. It’ll probably be worth it.

We may see some tweaks to Mei’s Snowball Offensive and Yeti Hunt, which could add a new spin to these game modes they have re-used over and over. But I wouldn’t bet on it. It’s a shame that the developers have not made any significant changes to these festive game modes after releasing them.

Have you tried it before? You can get the game on all major platforms, and you’ll be able to play it during the holiday season.