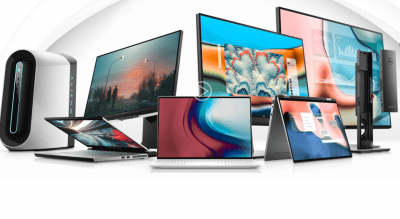 In an official blog post, Dell presents concepts for the workplace that will be the future. The vision for a futuristic office includes a notebook with two screens, a digital notepad and a notebook.

At this year’s Consumer Electronics Show ( CES), Dell unveiled the “Ori” concept and “Duet” concept. Ori is a tablet with a foldable 13.4″ display, while “Duet” connects the two 13.4 displays via a hinge. Dell appears to have a new product concept for next year’s CES 2021.

A recent blogpost by the US company shows a combination of the “Ori” and “Duet” concepts. Two 13.4-inch displays could be combined into one large, foldable screen. Two videos from Dell illustrate the still fictional projects. These videos can be found in the blog post.

Notebook with an expandable screen

Display area seems to be the key issue. This idea is being considered for classic notebooks. One example of a device that appears to be conventional is shown in the first concept drawings. There is a second display behind the screen that can be pulled out and placed on the rail.

Presentation on a digital notebook

These drawings were shown on a different, yet fictional, product in the video. This digital notepad is very thin and has no ports. It can be used as a companion device to a computer. The tablet can be used as a digital whiteboard and provides additional display space.

A second video by Dell shows how one envisions the office of tomorrow. This scenario saw a lot of work moved to the home office. There are now so-called “workstations” instead of being assigned permanent workstations. Augmented Reality (AR), which allows such a station adjust the desk automatically and monitor the preferences of each user, makes it possible to use Augmented Reality (AR).