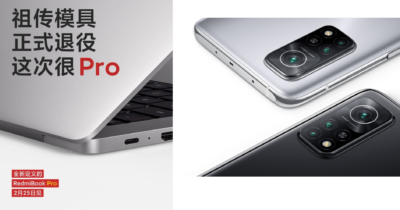 Lu Weibing has previously revealed that the Redmi K40 will have a version equipped with a Snapdragon888 processor. It will cost 2,999 Yuan, which is approximately $465. Redmi K40 series will also be equipped with a higher 4000mAh battery, and a flat-screen display.

RedmiBook Pro will feature the most recent Intel TigerLake H35 series processors, and an independent display MX450 with a 2K screen. It also features a NVMe solid state drive, Type-C interface support for PD protocol charging and fingerprint unlocking. RedmiBook Pro will feature an HDMI interface, as can be seen in the poster. It comes with a full-size keyboard, and supports backlighting. Xiaomi also confirmed that future notebooks will feature cameras.