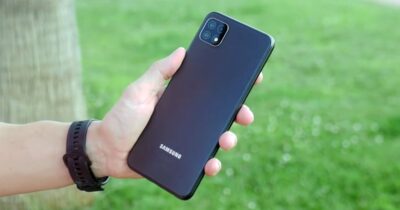 Samsung to Update Galaxy A22 5G to Android 12

This update will be available for the Galaxy A22 5G in Malaysia, Thailand and with firmware version A226BXXU4BVF7. It also includes the June 2022 security patches.

Samsung is the first manufacturer to bring the latest version of android to all its high-end and mid range terminals. We can see this by the fact that 9 of your cheapest devices have been upgraded recently. Thanks to the specialized medium SamMobile, the Korean giant has started to roll out the Android 12 update with One UI 4.1 to one of its cheapest Galaxy 5G, the Samsung Galaxy A22 5G. Samsung Galaxy A22 5G already has Android 12 with One UI 4.1.

This update will be available to Galaxy 5G in Malaysia, Thailand, with firmware version A226BXXU4BVF7. It includes the June 2022 security fix, which addresses 66 vulnerabilities and fixes general bugs. The Samsung Galaxy A22 5G phone is the most affordable from the Korean company.

Samsung’s latest customization layer for the Galaxy A22 5G has a number of new features, including a revamped user interface that uses Material You as the color palette, new widget designs and more widgets for the lockscreen and larger sliders to adjust volume and brightness.

This new software includes privacy and security features such as the Android 12 privacy panel. These quick settings switches allow you to disable or enable the camera and microphone. Privacy indicators let you know when the microphone is being used. Samsung also updated its native apps, including Gallery, My Files and Keyboard, with the new One UI.

In just three weeks, the first beta of UI 5.0 is available for the Samsung Galaxy S22. You can also check if the update is available by going to the Software update section in the Settings menu. To update your device with the most recent version of Android and the Samsung customization layers, click on the Download and Install option.

Samsung to Update Galaxy A22 5G to Android 12