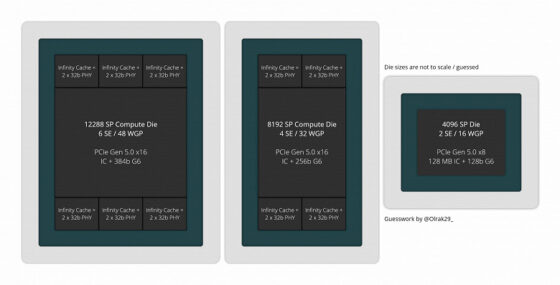 The Radeon RX 7900 XT video card can get an unusual GPU, consisting of 10 chips. But only one will be directly graphic

Navi 21 can store 128 MB and Navi 31 has 384 MB. That’s three times the memory. It will also be implemented differently to the current generation AMD cards.

All rumors and leaks had suggested that Navi 31 would have a dual-chip GPU. However, the most recent data suggests that it is a monolithic crystal. Sources now claim that MCD chips with Infinity Cache cache memories will be placed around or on top the GPU. Six such chips will be available, with three of them being able to receive additional chips via 3D V-Cache technology. The GPU will be equipped with 256 MB Infinity Cache and 128 MB via 3D V-Cache chips. This means that the total cache memory is 384 MB. This configuration also means that the GPU will have 10 chips.

Similar information has been available on the Internet before. It is possible that this is what the Navi 31 GPU will look just like it.

The Radeon RX 7900 XT video card can get an unusual GPU, consisting of 10 chips. But only one will be directly graphic