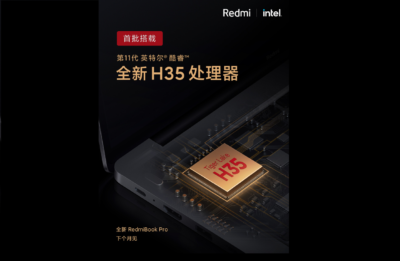 Redmi announced today, January 19, that the new RedmiBook Pro would be available next month. Redmi stated that RedmiBook Pro will feature the Mi Fan’s most awaited features.

It’s worth noting, Redmihas also published product recommendations from Mi Fan such as “Is there any camera”, “Can a new mould being released this year”, and “A laptop with a large screen”, and “Backlit keyboard”.

Lu Weibing is the president of Xiaomi Group China, and the general manager of Redmi. He said that Mi Fan’s expectations led to the new RedmiBook Pro. It will be Redmi’s first super-large notebook.

According to reports, the first batch RedmiBook Pro has the new H35 high performance processor from the 11th generation Intel Core. This upgraded version of the low-voltage U series has 4 cores and 8 threads with a turbo frequency up to 5.0GHz.

Redmi has been very successful in the laptop market recently. Redmi launched a gaming notebook a few months back and now they are focusing on everyday productive notebooks for home and office use. We will soon find out the price of this device, although it isn’t known at the moment.